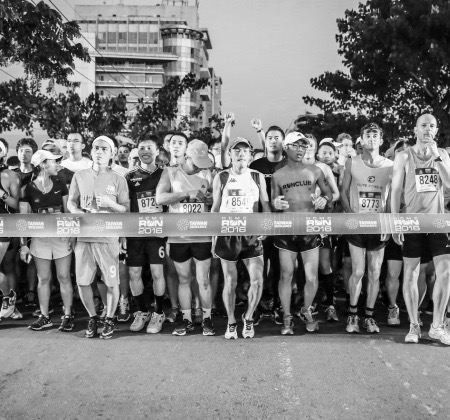 Successful organization and planning since 2013 plus tireless efforts to bring a marathon to the city, HCMC Run is now proud to be officially renamed as HCMC Marathon which will take place in January 14, 2018.

The event has grown from strength to strength over the last 5 years. The first edition of the race was held in 2013, more than 20 years after the last Ho Chi Minh City Marathon took place back in 1992. The 90’s marathon attracted a total of 250 runners from 26 different countries. The Vietnamese athlete Luu Van Hung finished in the 2nd was timed in order to provide a full experience of racing. After that, 2015 introduced the half marathon distance 21km and finally in 2017, the city held a 42 km distance and becoming a full marathon race. The name place with a time of 2:44:52h. The marathon was held thrice after the inaugural race but was discontinued in 1996.

In 2013, the concept was kind of new, running was not so frequent and not to mention running a marathon. With the aim of introducing the concept, the organization decided to start calling the event HCMC Run and offering only shorter distances; 3km, 5km and 10km. It might sound unusual but in that first edition, even the 3km distance was slightly changed to HCMC Run – The City Marathon. For 2018, it has been officially named as the Ho Chi Minh City Marathon and making its mission real, becoming the city marathon.

HCMC Marathon is the major running event in Vietnam in terms of participants. The participation has increased over 50% since the first edition; from 5000 participants to almost 8000 participants. This number is actually lower than the number of runners willing to join as the slots of the event are limited. The longest distances, pass through the Phu My Hung Bridge, a stunning part but with a maximum capacity of people. Consequently, in the last two editions, the event was sold out two weeks before the race day and having an annual waiting list of 1000 runners.

HCMC Marathon has become an annual event for Vietnamese as well as a frequent destination for those living overseas. The Vietnam National Administration of Tourism has jump in and decided to support the event as a highlight of Vietnam’s sports offer. Besides that, the race has also lead to a positive impact in the sports market which we can see reflected by the market entry of international brands such as Garmin or 2XU.

“We are proud to be able to call the event The Ho Chi Minh City Marathon and we see it as our mission to contribute to a healthier and more active sporting community, as well as to the tourism and sport development of our country. Through the event, we hope we can showcase the dynamism and energy of this city to the world. We also want to thank the HCMC Department of Culture and sports together with the Association of Athletics Federations in HCMC for their endorsement and also The Vietnam National Administration of Tourism for their support”, said Mr. Bady Pham, Managing Director of Pulse Active.

Those who are planning to challenge themselves and join the Marathon are encouraged to sign up and start training to have a safety and enjoyable experience. More information about the race is available on the website and latest updates are published on the Facebook page.